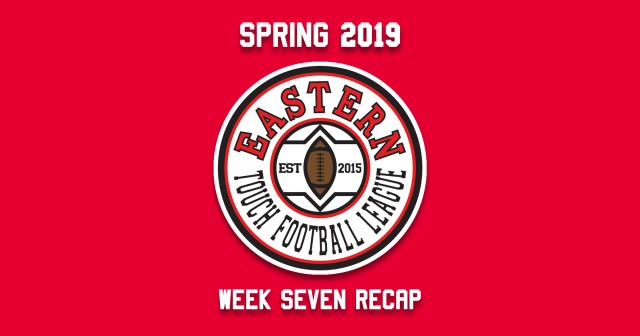 What a week. The weather was decent. The field conditions were decent. But the play was unreal. I know this will hurt some, and by some, I mean Bo. But can we get a united COOONNNNNNOOOORRRRR!!! The biggest moment in ETFL history. Don’t @ me on social media!

Here is your Week 7 Recap.

This game is proof that the write-ups work. Last week we discussed how the Scugog offseason was only averaging 16-points a game, and this week Rich Lafoy and the gang put up a staggering 26-points. Before I mention anything else, I must mention that Heinz Stork scored a single touchdown in this game. And if you saw my text message history, you would know why, as I currently fear for my life because I didn’t mention that he scored last week. You’re welcome, Mr. Stork. I will also not mention that he dropped a touchdown, nor will I mention that both Cole and Kyle scored as well because apparently, Mr. Stork is sick of hearing that also. But I believe I’m allowed to mention that Will Jeyevareen scored as well. Another solid defensive showing as well, as the Scugog defence held veteran Buzz Bezzant to just 6-points on the day.

This was your game of the week. This was a tight game to the bitter end. RPM has been pure fire these past few weeks, but CTI went toe-to-toe with the offensive juggernaut. Rob Pacas and Mike Rafuse were slinging dimes, as they combined for 7 touchdowns and 3 two-point conversions. The standouts however in this game were none other than Josh 2.0 and Pingz, who scored a combined 3 touchdowns and 2 two-point conversions. RPM did get a lot of help from their defence with 3 interceptions on the day from Pingz, Delroy, and Brad Spencer. IF RPM can play both sides of the ball the way they did in this game, they are going to be tough to beat in the playoffs.

This was a tight, low scoring, but entertaining game to watch. A battle of wills. But it was Brent’s squad will that won this matchup in the end. In fairness to the Hampton squad, who has been lights out all season long, was without their starting quarterback for the majority of this game with a rib injury. But today was Ryan Henriques day, as Brent’s first rounder scored the offensive trifecta with 1 touchdown, 2 field goals, and 1 one-point conversion. Whitter-nation was the only other player on Brent’s squad to land on the stat sheet with an interception on the day. But I’d feel terrible though if I didn’t give a special shout out to Allister Gundy who scored Hamptons only touchdown of the day. It’s a tough way to finish the season, but Hampton is still a strong contender come playoff time.

This was a great game with one of the best all-time finishes in ETFL history. A truly great sideline moment. Something that had absolutely nothing to do with the actual game but everything to do with a bet between Connor and Bo. Both men made a bet before the beginning of the season on who would score more points. Bo was in the lead. Connor needed merely two-points to either win or tie, it doesn’t matter.

Regardless, Connor had his moment earlier in the game to put the bet away but dropped a touchdown. With the sideline devastated, other than Bo, we waited and watched. And then the improbable happened; the impossible, the never in your lifetime, stars aligning type of moment happened.

It was the last play of the game. The game was already in hand for Dawksports. It was 3rd and 10. The ball was around the 45ish-yard mark. We’re all thinking hooks with a Connor go. The defence, knowing what was happening was thinking the same thing. Quarterback Brandon Pottle, filling in for handsome Rick, calls almost exactly that; all hooks with a Connor post. Because he knows, and he’s giving the crowd exactly what we want, a show.

Connor completely ignores the post and runs the go in desperation. The defence, knowing the call has a miscommunication on the far end of the field to Connor’s side. Connor catches the wide open pass from BP. He’s on the 30, he’s on the 20; one of the Direct defensive players begin to catch him; he’s on the 10, the 5. With a Defender right on his back hip, Connor trips and falls into the end zone with no more time left on the clock. The referee raises his arms to call the touchdown and the crowd goes WILD. We’re all screaming, CONNNNOOOORRRR. Bo was screaming at the ref for a flag but gets none. Connor and Bo meet on the sideline and exchange a fist bump because Connor was covered in mud from the fall.