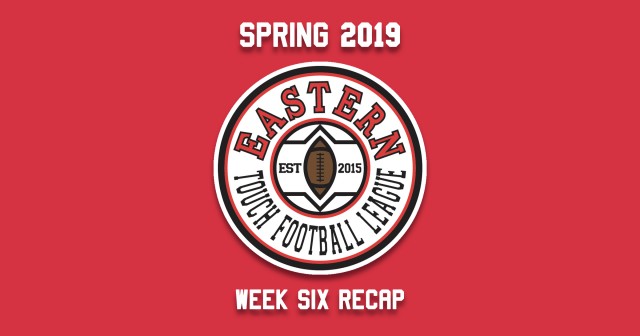 There’s no sugar coating it. The weather this season has been less than ideal. But this weather has seemingly brought out the best in everyone, as week after week, you come out and you balled. This week was no different.

Here is your Week 6 Recap.

This was a much closer game than the scoreboard would have you believe. The CTI defence gave up a pair of scores early in the first quarter, but with a switch at the rusher, position was able to stop the bleeding and hold Brent’s to only one other offensive score throughout the rest of the game. CTI’s offence struggled, as drops were a major issue throughout the game. Nonetheless, CTI battled to the very end. Brent’s backup quarterback, Ryan Henriques played an amazing game filling in for Ricardo Duarte, throwing touchdowns to WhitterNation and Victor Alisauskas.

Shane F@#%ING Ruest. That’s it. What more is there to say than that. He came. He saw. And he conquered. He was Hampton Regal in this game. One of his teammates described it as: “Shane turned super Saiyan, best individual performance in ETFL history.” Dawksports did have their moments early in the game, scoring two touchdowns. Handsome Rick did his thing, throwing touchdowns to Charlton and Woodcock. But it was a second half dominated by the man, the myth, and the now legend, Shane Ruest that ultimately won Hampton the game. Dawksports is still a top team in this league, but this day was Shane’s day.

This was a tight game. Not many points scored. But there didn’t need to be. But I don’t want to talk about this game. I want to talk about this Scugog defence. Everyone talks about their offence, and they do have weapons. But they’re only averaging 16.8 points per game. Not quite what you’d expect from a team with the gazelle, Cole Lafoy, and Kyle “K-Train” Shaw. What makes this team special though is their defence. Through 6 games the Scugog defence has only allowed 41 total points. That’s 6.8 points per game. They’ve had three separate games in which they’ve held a team to ZERO points, ZERO! So although they aren’t scoring as they’d like to, they don’t have to with a defence like this. Can it be a perfect defence? We’ll see. But at the moment, they’re really F@#%ING good.

RPM has had an interesting season. Granted their 4-2. But statistically, their season has been a tale of two halves. During the first three games of the season, the RPM squad scored a total of 45 points, averaging only 15 points per game. Whereas, in their last three games have scored a total of 105 points, averaging a whopping 35 points per game. When this team is on, they’re on. They may have one of the best offences in the league with Pingz, Adrian, and Josh 2.0. If they can keep this offensive momentum up, this RPM group is going to be one tough team to knock out of the playoffs.