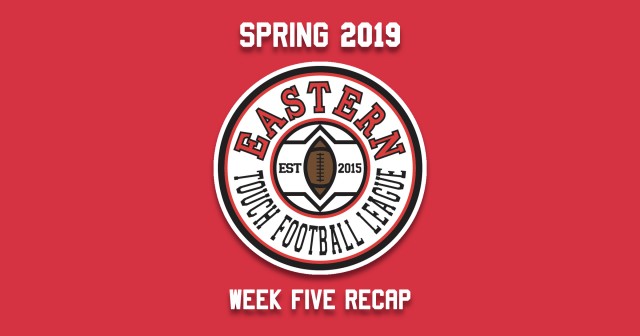 You came. You balled. And some of you conquered.

Here is your Week 5 Recap.

Offence wins games. Defence wins Championships. The Direct squad showed they had a Championship caliber defence on this day, as they picked off veteran quarterback Buzz Bezzant a total of three times. Mike McNeill and Ben Masson each took their interceptions house, scoring a combined 12 defensive points. And Alex Leonidakis picked one off himself, showing he’s not just an offensive force. Buzz Bezzant showed a lot of heart in this game, never quitting, and finishing the game with a touchdown pass to Dave Thomas.

Default win for Scugog. An unfortunate and disappointing no show for the CTI squad. Cole Lafoy dominated the warm-up, however, despite the imperfect weather conditions.

This was a well-matched game, despite Brandon Pottle’s early pick-six. Brent’s defence battle hard, stopping the high powered Dawksports offence multiple times, allowing them to get back in the game. With the combination of a few key catches by Kwame and a mossing of two defenders by Jamie Whitter Brent’s squad was able to make this a game. Unfortunately, the strong composure and defensive play of Dawksports allowed them to hold on to the win.

Easily the game of the week, maybe the year. Mikey Bezzant and Bryan Earle connected on two first-half touchdowns, setting up Hampton with a secure lead going into the half. The RPM offence was inconsistent in the first half, but as a great leader does, Rob Pacas lead his team to a second-half comeback. The RPM squad scored in a number of ways with three touchdowns, three two-point conversions and a pair of field goals. It was a total team win.