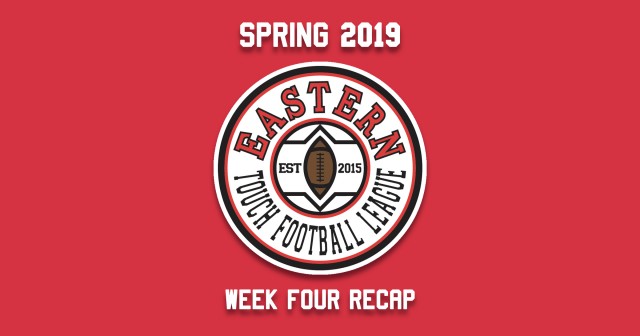 Back-to-back nice Saturdays? We’ve been blessed by the football gods. We also had ourselves some games. In Week 4 we saw two tight games, along with two blowouts with lots of scoring. Plays were made. The chirp winds were out in full force. And a great time was had by all.

Here is your Week 4 Recap.

There were a lot of fireworks in our 9 am matchup. Unfortunately, it was very one-sided. The RPM offence came out, and they came out swinging after back-to-back losses. Rob Pacas threw five touchdowns on the day to three different receivers, including three touchdowns to his number one draft pick, Pingz. Adrian McIntosh and Josh 2.0 also had themselves a touchdown each, and Delroy George pitched in with an interception.

This was a game. Hampton had a stronghold early in this game. But Direct battled their way back into it, coming up just short of fulfilling the comeback. Alex Leonidakis balled out for the Direct squad, making the almost comeback real. He mossed three guys including veteran, Bo Gluch while picking up a much needed first down to extend the drive and then scored on two touchdowns and a two-point conversion. But it was all for nothing, as the combination of Aaron Karamath and Shane Ruest carried this squad to their third win of the season. AK scored a pair of touchdowns, along with a two-point conversion, while Shane Ruest kicked the remaining points they need to win the game. Hampton is here, and they’re the real deal.

CTI has a squad. They started the season 0-2, but have battled their way to back-to-back dominant wins. Anton O’Neil had himself a game, scoring on two touchdowns and two, two-point conversions. Matt Rafuse also scored a pair of touchdowns, while Paul Leckey booted another two points on two-extra points. Despite being blown out of this game, there was one shining star this week for the Moody squad. Chris Heath made some INCREDIBLE catches, including the only touchdown of the day for Moody, in which he was thrown the ball in tight coverage. The ball was tipped by the CTI defence twice, but that didn’t stop the big man from coming down with the circus catch of the day.

This was the game of the day. This was Scugog’s game for three full quarters. Everything was going their way. Ricky Touchdown threw well but received no help from his offence through the first three quarters. It appeared as though this game was a lock. But being the unselfish veteran he is, Ricky handed over the reins to his son Brandon in hopes to create a spark for a miracle comeback. Brandon led the Dawksports squad to a 15-point comeback but simply ran out of time. Scugog had run up the score too much and walked out with a defining win, as the only remaining undefeated team in the ETFL. A special shout out to the gazelle, Cole Lafoy. This man scored on two touchdowns, one extra point, and also had an interception on defence. Unreal.