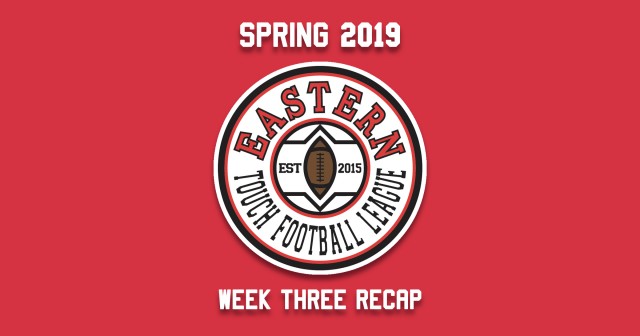 FINALLY. We had some spring weather for the Spring 2019 ETFL Season. And with it came the heat on the field. The boys came out to play this Saturday with five different teams scoring 22 or more points. It was truly a great day for football.

Here is your Week 3 Recap.

Don’t let the scoreboard fool you. This was not a blowout. This was a close game that came down to the wire that ended on a pick-six by the Billy Goat himself, Kyle Shaw. Cole Lafoy continues to dominate on offence, as he scored two-touchdowns on the day with Toi Simon adding a touchdown of his own, along with two extra points. Scugog is looking to be quite the team to beat this season.

This was a back and forth battle between veteran quarterback Buzz Bezzant and rookie quarterback Ricardo Duarte. But it was a field goal that separated these two teams on this day. Field goals seem to be Buzz Bezzants kryptonite, as it was a field goal that separated him from the “A” Championship last season. Brent’s scored three touchdowns from Aaron Johnson, Derek Ginter, and Victor Alisauskas. And it was Ryan Henriques big leg that lead Brent’s to their first victory of the season.

Handsome Rick was at it again this past week. Some call him Ricky P, but we should be calling him Ricky T, as in Ricky Touchdown. The veteran gunslinger threw an impressive five touchdowns on the day. He did get a little help from his defence though with interceptions coming from Brandon Pottle and Connor Tamblyn. Dawksports made a claim as one of the top teams in the league with a dominant win over RPM.

Dominate. That’s exactly what CTI was this week against the talented Direct squad. On top of four offensive touchdowns from Loxley Prince, Matt Rafuse, and Rob Edwards, the CTI defence also contributed a touchdown of their own with a pick-six from Rob Edwards, giving him two touchdowns on the day. Paul Leckey was an extra-point machine, kicking five extra-points on the day. With their offensive woes seemingly behind them, the CTI quad should give any team troubles moving forward this season.