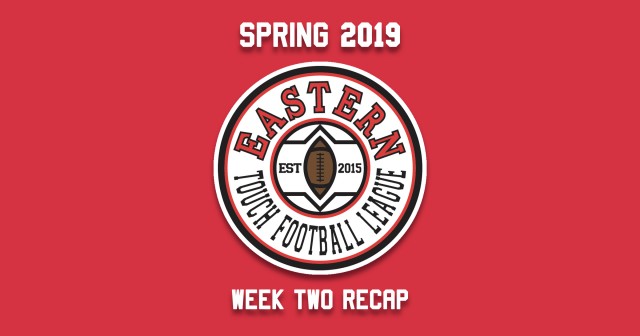 It was wet. It was cold. But that didn’t stop some teams from putting up points. The week started out with a defensive battle at 9am and then was followed by three blow outs. As we all wait for sunnier days, at least a few teams can’t wait long enough as the recent weather has been a serious issue.

Here is your Week 2 Recap.

This is how you kick off a week of football. This game was decided by simply four points. But neither offence was on display this week. This was a defensive showcase; a battle of wills. In our 9 am game, we saw a total of six interceptions, with three pick sixes, and three sacks. There was a total of 30 points scored, but only one offensive touchdown in the entire game. That’s football at it’s truest form gentlemen. Congratulations.

This was not the game we were all expecting. We all thought this would be a battle of offences. But rather, we witnessed a bully beatdown of epic proportions. RPM is loaded with talent. But their defence did not show up on this day. Instead, the Scugog receiving core ran wild and put up touchdown after touchdown. To opposing defences to come; good luck trying to stop the combination of Cole Lafoy and Kyle Shaw. They simply looked unfair in Week 2.

Happy Birthday Stu. Have yourself a game. And he did. The birthday boy and the Direct squad went off. They totalled five touchdowns on the day to Brent’s zero. This was a total team win as well with four different receivers catching touchdowns, including Alex Leonidakis, Marlon Wong, Mike McNeill, and Mike Sperling. They came. They saw. They conquered.

Is it too early to start talking about comeback player of the year? Because Mikey Bezzant is certainly making a serious claim for that. In the first two weeks of the season, Mikey has gotten back-to-back wins. This week he led his team to a demanding win over his brother and veteran quarterback Buzz Bezzant. It’s not just Mikey though. The man has himself a team. Shane Ruest and Aaron Karamath have been offensive stars, while Bo Gluch has been a defensive nightmare.