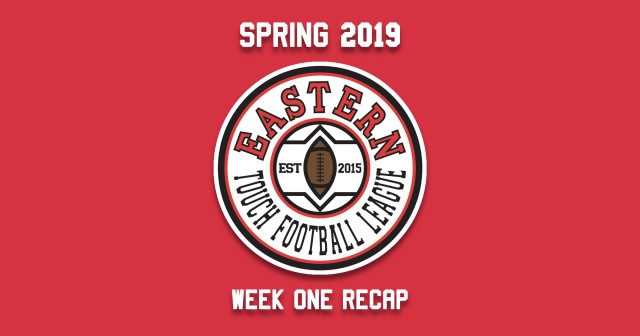 Welcome to Week One of the 2019 ETFL “Spring” Season. I put Spring into quotations because it was cold as balls. But we balled out anyways and actually had four great games despite the wind’s best attempts to play defence.

Here is your Week 1 Recap.

RPM is a dangerous team. How dangerous? They played without their first & third-round draft picks and still pulled out the victory over the veteran quarterback, Stu McNeill. The Pacas-to-Pacas connection was strong, as the father-son duo connected on three touchdowns for the day. This is a squad to gameplan for.

Game 2 marked the return of a living ETFL legend, Rick Pottle. Handsome Rick and the boys were relentless on this day. The Dawksports defence picked off the veteran quarterback, Buzz Bezzant a total of five times for two pick-sixes, including a disgusting one-handed interception by Brandon Pottle. We all knew the offence was going to be good, but who would’ve known the defence would be this squads strength. This is a team to circle on the calendar folks. Be sure to bring your A-game for it.

This was a tight game. Both teams battled it out all game long. But Hampton slightly got the better of CTI this week. Hampton had quite the pass rush, as Jonathan Giancroce had three sacks on the day. While Mikey Bezzant’s return to the ETFL kicked off with a two-touchdown game. The recipient of those two-touchdown passes was Aaron Karamath, who’s almost impossible to catch. And you can’t forget the strong kicking game of the man himself, Mr. Shane Ruest.

With a pairing like Cole Lafoy and Kyle Shaw this Scugog squad will always be tough to play. But the Brent’s squad were not intimidated and held them to only 10 total points. Unfortunately, their offensive woes prevented them scoring and Scugog walked away with the decisive win. Toi Simon was a kicking machine, punching in a FG and an extra point. While Cole Lafoy looked like a damn gazelle out there scoring Scugog’s only touchdown of the day.