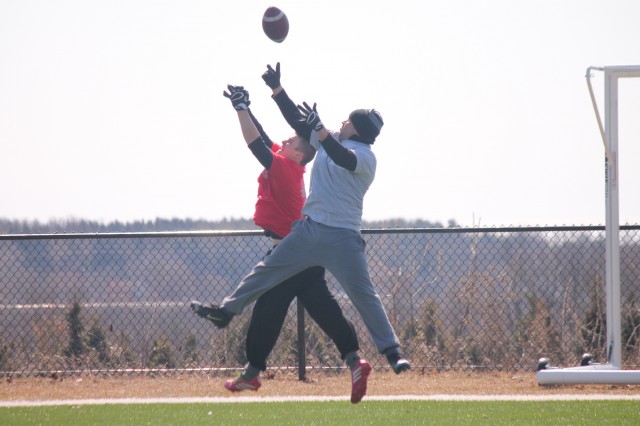 It’s official. There is no Spring. There is only Winter. But again, you balled out. Despite the rain, snow, and even hail; Week 5 was just as, if not more exciting than the previous four. In Week 5 we saw two-games that were decided by a single point. We had a game so evenly matched that we had our first tie of the season. And we saw one team let the league know that it is still a serious Championship contender.

Here is your Week 5 Recap.

What a battle. This was a shoot-out, plain and simple. Veteran quarterback Buzz Bezzant was on-point, throwing three-touchdowns and a two-point conversion. But Jelani Adams showed the veteran that he too had what it takes to keep up with the veteran, matching Buzz with three-touchdowns and a two-point conversion of his own. The difference in this game was Andrew Brimpong, who late in the game kicked an extra point to seal the win for the Dawksports squad.

Another great battle in Game 2. Hampton controlled the first half of this game, shutting down the high-powered Transmission offence. Second-year player Eric Perez-Salas picked-off veteran quarterback Rob Pacas twice in the first-half. But like any great quarterback, Pacas made the necessary adjustments at half-time and had the Transmission offence back on track in the second. Rob threw two-touchdowns, as well as a two-point conversion; but it was his leg that made the difference in this game, as his extra-point kick was enough to get them the win.

Scugog has been a dominant force offensively for the past three-weeks and this Saturday was no exception. Brandon Pottle connected on three-touchdowns with Drew Pottle (twice) and Josh Hodge, but Moody Construction was not going to take it laying down. Mike Bezzant and Toi Simon connected on three-touchdowns of their own, while Toi also kicked three one-extra points. With either team refusing to loose, both teams walked away with a tie.

There is simply no words that can soften a blow like this for the Cops squad, as this game was a straight blowout. Brent’s Plumbing dominated Cops both offensively and defensively. Brent’s had a total of five-interceptions on the day, while Matt Rafuse was an absolute monster offensively with five (I said FIVE) touchdowns. This was a statement game for Brent’s Plumbing, reminding the league that this is a Championship calibre squad.