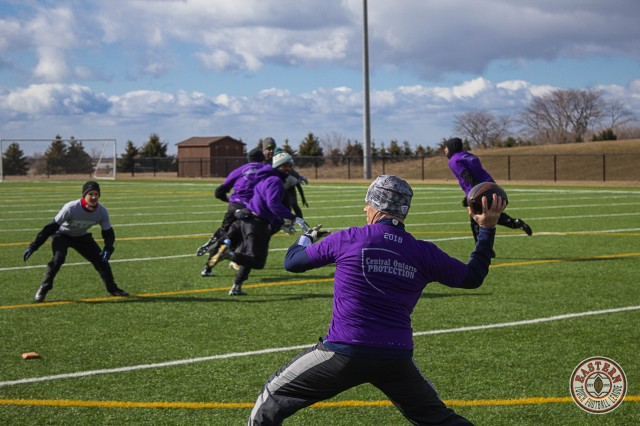 It was cold. It was very, very cold. But as we continue to wait for the Spring portion of this 2018 Spring season, you fought through the cold and you balled out. This week we saw a tightly fought battle in our opening game with a single player putting the team on his back and leading his team to victory. We saw a rookie quarterback come into his own in the second game of this week. And we saw two teams really take hold of the league and stamp themselves as the top-two teams to beat this season.

Here is your Week 4 Recap.

This was a tightly fought battle between two very talented teams. Shane Ruest stepped in at quarterback for the Moody squad and played admirably, throwing for three-touchdowns. Ultimately a botched pitch on a kick-off allowed the Cops squad to get the ball back and score to put them up by two-scores, leaving Moody in a tough hole. Moody fought hard but the Cops squad never slowed down and walked away from this week with an overall record of 2-2 on the season.

Jelani Adams came into his own this week. The rookie quarterback threw three-touchdowns to three different receivers. The Dawksports squad had themselves a game defensively, picking off the Brent’s Plumbing quarterback four times. Despite throwing four-interceptions Matt Refuse threw the ball very well on the day including a touchdown pass to Jamie Whitter, who continues to ball out this season. Both teams walk-away from the week with a 2-2 overall record.

After a close loss last week Transmission Depot came out and made a statement with a dominating win over Direct Elevator. Rob Pacas was on point throwing four touchdowns to four different receivers. Keitel Burry had himself a game with two touchdowns, including a beauty kick-return. Direct Elevator battled hard despite missing the majority of their team. Veteran quarterback Buzz Bezzant was forced to play both ways for the majority of the game, throwing a single touchdown to Mike Sperling and a two-point convert to Kyle Maclean.

Scugog Sportsware is a force to be reckoned with this season. Brandon Pottle is throwing the ball as good as anyone has in the ETFL. With four touchdown passes this week, Brandon now has 13 passing touchdowns in his last three games. Hampton Regal had their moments throughout this game but simply could not capitalize when needed. Veteran Heinz Stork is having himself a season defensively for Hampton, as he grabbed his third interception of the year this week.