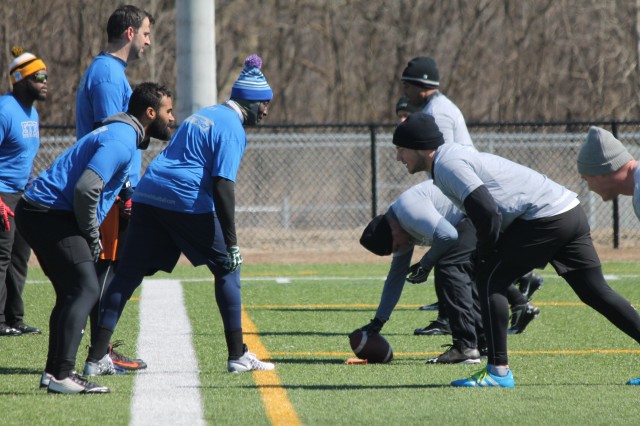 The cold winds of the South Courtice Arena were once again in full effect. But once again it did not effect the play on the field. We saw three different teams score four or more touchdowns in Week 2, with two of those teams scoring 30 points or more. We saw two teams remain undefeated. And two rookie quarterbacks, including veteran player Brandon Pottle, pick up their first ETFL win.

Here is your Week 2 Recap.

Dawksports were firing on all cylinders this past Saturday, as they dominated Hampton Regal the entire game. It was an overall team effort with scores coming from four different players, including four one-extra points coming from four different players also. Hampton Regal did have their moments throughout the game though, scoring on two different drives. But inconsistency on both sides of the ball stalled the Hampton squad.

This was not a game for the weak of heart. Brandon Pottle was throwing dimes all game long. Although this was only his second game as an ETFL quarterback, he played like a ten-year veteran. Scugog scored an outstanding six-touchdowns, while dominating defensively with three-interceptions. It’s been a rough pair of games for rookie quarterback Rob Wagner, but we have no doubt he’ll turn this thing around for the Cops squad.

Transmission Depot is a force to be reckoned with folks. Rob Pacas drafted well and is doing what Rob Pacas does best, winning. Transmission was on-point all game long on both sides of the ball. Not only did they score four touchdowns but they also picked off veteran quarterback Mike Bezzant. Rookie Alex Leonidakis showed the league that he was a steal in the third-round, as he finished the game with three-touchdowns and a solid performance defensively.

This was a competitive game. Both teams fought tooth-and-nail, but ultimately it was a Mike Refuse lead Brent’s Plumbing team that came out on top. Mike Refuse is sitting on a hot-streak right now. The veteran quarterback threw three-touchdowns to three different receivers. Direct Elevator put up a serious fight though defensively, with two-interceptions and two-sacks. Offensively for Direct, Josh Devine had another outstanding day with another two-touchdown performance.