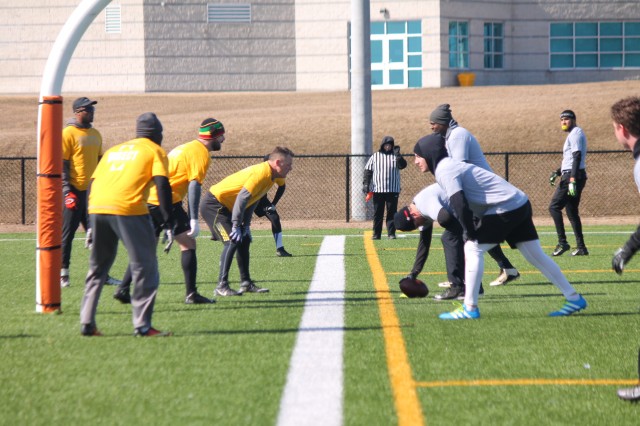 It was windy. It was cold. But the football was pure fire in Week 1 of the Spring 2018 ETFL season. We had four quarterbacks make their official ETFL debuts, including two savvy veterans in Brandon Pottle and Kyle Shaw. We saw the “Brother Bowl” much earlier than years past. And we had three well fought games.

Here is your Week 1 Recap.

Quarterback Mike Rafuse seemed to have carried his 2017 Fall Championship play into Week 1, as he methodically picked apart the Scugog defence. Fall 2017 top-scorer Jaime Whitter also had himself a game. Whitter led Brent’s Plumbing in scoring with 12 points, while also having an interception defensively. Brandon Pottle and the Scugog offence seemed to have had some trouble finding their rhythm, only scoring once in the second half.

The one thing you can always count on from the “Brother Bowl” is a well fought game. Both quarterbacks were slinging the ball all over the field. Josh Devine had the breakout play-of-the-game with a HUGE kick-return that went for six. Devine also lead Direct Elevator in scoring with 18 points. Despite missing their number one pick due to (a hockey) injury, Moody Construction still played hard. Jason Carter had Moody’s only score of the day.

Although new quarterback Rob Wagner had a few bumps in his ETFL debut, he more than proved himself with some great play calling on the field. Both defences were solid throughout the game. Heinz Stork was a defensive nightmare for the Cops squad. The savvy veteran picked off the new QB on the opening drive, and also had another that he took to the house later in the game. Andrew Heaney opened the game by scoring Hamptons only offensive touchdown of the game. Adam King also had Cops only score of the game in the third-quarter.

Transmission Depot came out of the gate hot with their solid lineup of athletes. Marko Glavic dominated the game with 2 interceptions and 8 points. It was a rough introduction to the ETFL for rookie quarterback Jelani Adams, as Transmissions defence was able to secure a sack and picked him off on four occasions. Luckily for the new quarterback he drafted Andrew Brimpong, as Pingz did what Pingz does and took over the game for the Dawksports squad. He scored both of the Dawksports touchdowns, one on a deep reception and another on a pick-six.